These past few weeks have really been rough at our house. I swear if its not one thing it's another over here. Right after the boys finally got over the flu I caught it.  Then a few days later Madden started running a fever and had a horrible ear infection. Then both boys caught the horrid never ending cold. What makes it worse is when Madden gets a cold it's rough. His asthma and colds do not mix. The only way I can describe it is he sounds like a really bad smoker! That turned into croup and let's just say we haven't slept much around these parts! He must swallow a lot of air too when he coughs because he gets horrid stomach aches and burps non stop. It is so sad to see him in so much pain. I keep praying we are getting everything out of the way before the new baby comes! Let's pray the madness stops before I turn into an even crazier pregnant lady! 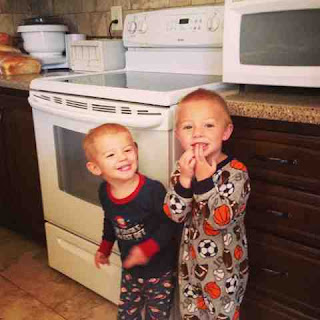 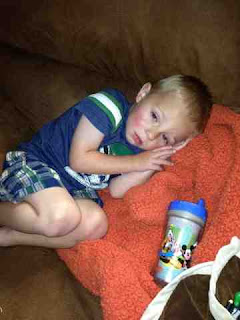 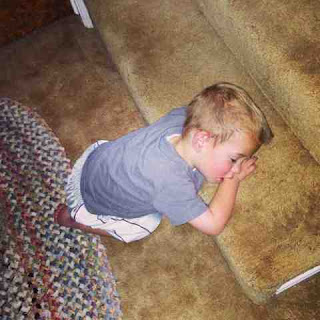 We headed down to St.George for Memorial Day and my birthday! It is always so fun to go down and relax! My mom and the boys took mei out to breakfast on my birthday while the big boys went golfing. Than we shopped and spent my birthday money! I got a new bed spread and some lamps and now I can't wait to put it on my new bed set!!! My brother Jake and his family are moving to Arizona and stayed one night and it was so fun to hang out and be with them too! I couldn't of asked for a better birthday! 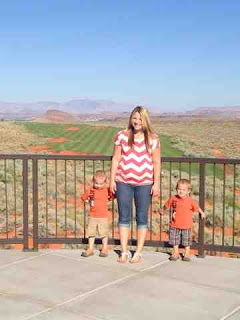 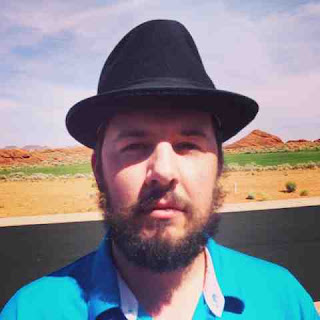 I feel the need to explain this picture. My husband has had a pretty good Duck Dynasty beard going on. My nephew Matt was constantly wearing this hat so Kars put it on and resemble the Amish a little to well!
﻿ 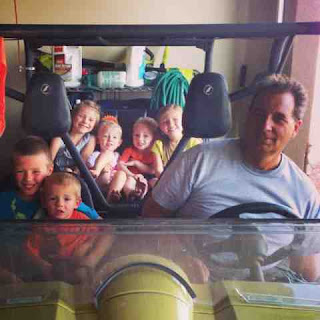 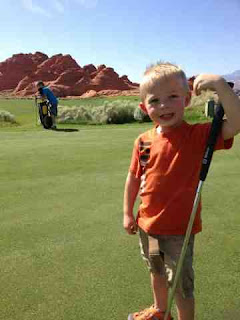 Keeping Up with Us Crazies!

Life seems to be flying by these days. I look back at the past few years and wonder where the heck they went. I can honestly say I love the way life is now. Karson and I often talk about how we wish we could just freeze our boys so they will never grow up. They are at such a fun crazy age. I figured its been a while since I have updated on our crazy lives so here it is!
﻿ 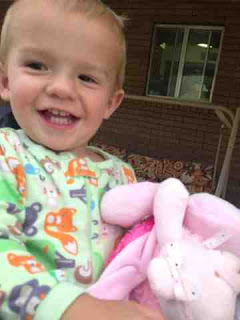 Nash will be two in August. He has grown up so much in the last little while. He talks like crazy. He has such a fun personality. He is turning into a little wild man. He goes non stop all day long. He is obsessed with Bubble Guppies. He still loves to cuddle which I love. He sings constantly. His favorite songs are I love Momma, Pirate song, and Itsy Bitsy Spider. Nash loves to eat. I am pretty sure he hasn't met a food yet that he wont down. He loves soup, any kind! He loves cheese. He loves his big brother Madden. He does everything Madden does. He will take about a 3 hour nap everyday still.  He and Madden are sharing a bed and he thinks its pretty neat. He loves juice and chocolate milk. He has a blanket he calls his baby and carries it everywhere. He has also found these pink bear and kitty animals that he has recently become obsessed with. He could spend all day outside riding his bike and blowing bubbles. He loves to play ball. He sees a ball and calls it his baseball game. He makes us laugh all day long.﻿ 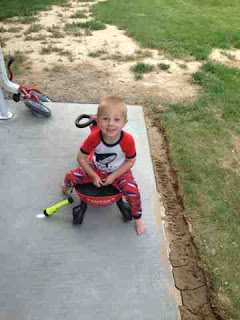 Madden will be three in July. He is no longer a baby but a little boy now. He talks and talks and talks. He says some of the most hilarious things. He sometimes talks like he is a grown-up. He still is a horrible eater but has gotten so much better. He loves quesadillas, grilled cheese, and fruit. He LOVES milk. He still has his little monkey he carries around everywhere.  He no longer takes naps because he insists he is a big boy. He sleeps like the dead. Once he is out, he is out! He is obsessed with Disneyland California as he calls it. I am pretty sure the only reason we can get him to eat is so he can ride splash mountain and grow big. He is very OCD about the way things have to be done. He is a stubborn little boy and wont let anyone but me buckle him in his car seat or change his bum. He has a huge orange cozy blanket he is obsessed with. He wraps himself up in it and watches his movies. He has quite the imagination and can play for hours with his toys. He loves to go look at our new house and see what the guys did on it. He asks all day long to go play with his friends. His best buddy is Nash. When Nash is napping he begs for me to wake him up so he can play with Nash. Love our big boy.
﻿ 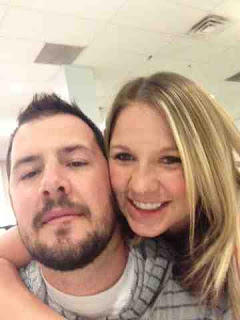 Karson is working like a crazy man these days. He now has two full time jobs and I am not sure how he does it. He is such an awesome dad and the boys love when he is home. We are working on opening a few smaller side businesses as well which keeps him busy too. I am as pregnant as ever and love being able to be home with the boys. We still don't know if this baby is a boy or a girl but we will find out in less than 9 weeks! I still cant believe we will be a family of 5! We are on a race with our house and the baby. Hopefully our house will be finished before this baby comes. Our house has gone up really fast and it is fun to see it turning into a home. It is all dry walled and they start painting this week. They have also started today with the exterior which is exciting!
That pretty much sums up our lives right now. Crazy but awesome. I love my little growing family.

The Week From You Know Where

This week has sucked. I hate that word but its the best I could come up with without using profanity! Last Friday night we went to check out our house progress and decided to get a little fast food before heading to a friends house. Well right as we got our food Nash threw up everywhere. We thought maybe he had choked a little because while we were cleaning him up he was dancing around. We went home anyways. The next day we were doing a service day for Karsons grandparents and Nash started getting diarrhea. This is fairly normal for him since he has always had a chronic case of the runs. But it all went downhill from there. He proceeded to throw up again all over the car on the way home. The next day he ran a horrible fever and was very lethargic. He had it coming out both ends poor guy. Monday rolls around and I had to go run a few errands. Madden feel asleep in the car so I drove around for a bit trying to pass the time. The poor kid woke up vomiting all over the car. It is now Friday and I can't even tell you how many messes I have cleaned up. It is never ending. Poor Madden can't shake it. He gets so sad whenever he throws up. I am so over this darn flu! So hears to hoping I don't have to do another load of laundry this weekend! 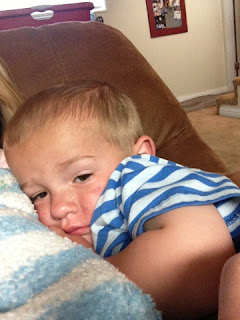 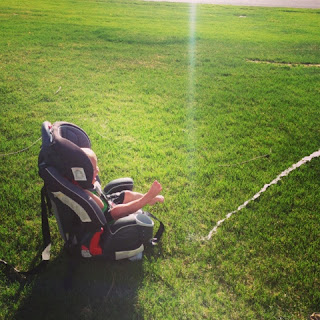 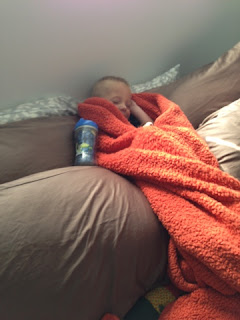 Nash was sleeping in a big boy bed before we moved. Once we moved to grandma reds house he turned into a monster and wouldn't stay in bed. We pulled out the pack n play and bedtime was a breeze again. That is until Madden showed him how to climb out. He is such a little stinker and will not stay put. Luckily we just got a king size bed so we moved the queen into the boys room and they both have slept great in that! It is so cute to go check on them all cuddled up. No matter how far apart they are they always end up in the middle. I'm so glad they are such great buddies! 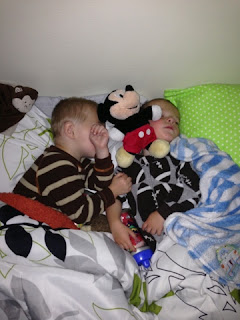 Ice Cream at Our New House

All Madden could talk about for days was eating rainbow ice cream at his new house! So we willing obliged! It has been fun watching our house progress! The boys are so excited and can't wait to live at daddy's new house! Not sure why its just daddy's though! The boys just want to spend all day there! They get sad when we leave. Hopefully they will be just as excited when it is time to move in! 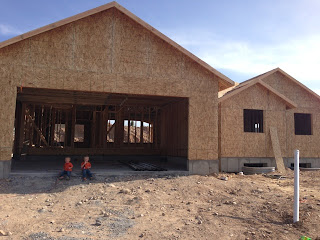 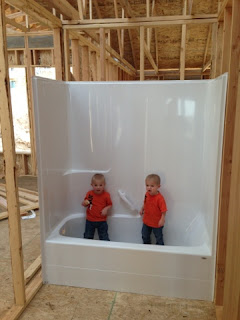 There is nothing cuter than little boys in church clothes. Madden loves wearing a tie like daddy! He told me all the girls are going to think he is cute in nursery! They are handsome little boys! 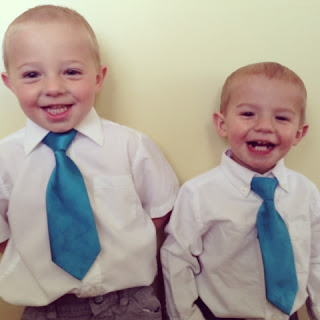 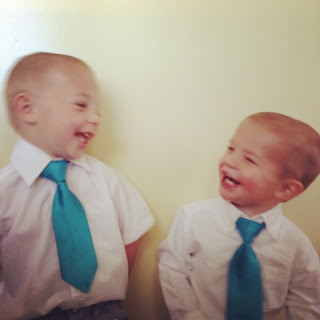 My boys have loved the warm weather. It means we get to play outside all day long! I swear they could live in the dirt and blow bubbles all day long! Utah spring keeps playing tricks on us and they boys don't like it! We have had to brainstorm to keep these little men entertained! So glad they love to be outside! 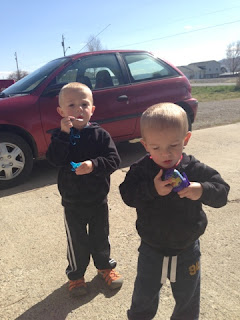 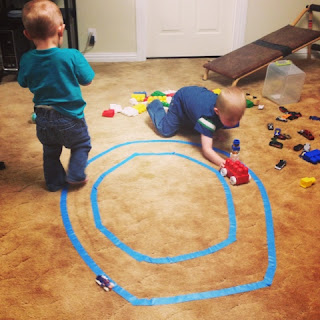 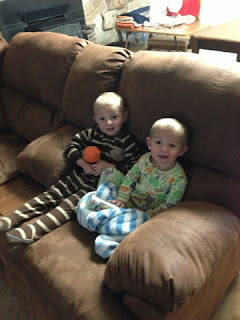 We have loved living with Grandma Red. She is such a sweet lady who loves my boys. If I can't ever find one of the little guys they have snuck away for some Grandma Red time! She is such a fun great grandma! I'm so glad that we have had this time with her! Even though I'm sure she is counting down the days to our house being done, we will miss living with her! 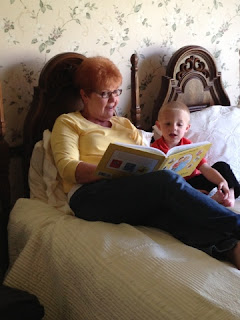