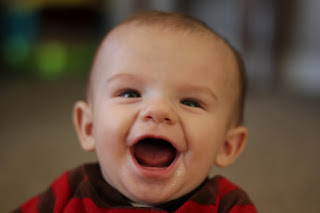 About a month and a half ago I made a trip up north to visit  my family. Right before I left Nash had one of his major blowouts in his car seat. I took out his infant inserts, threw them in the wash, and off we were. When I got to my parents my dad had mentioned something to me about the way Nash was positioned in the car seat. He was sitting crooked and was noticeably leaning to the right. I chalked it up to the fact that he was still too small and was leaning because he didn't have the inserts in. As soon as we took him out we noticed that he was still leaning and that his head wasn't lining up with his torso. It was such a minimal difference but very noticeable after it was pointed out. I call this blessing number 1 because I don't think my dad would of noticed if I had not taken out the inserts to the car seat. 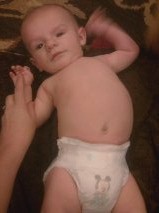 Blessing number 2 followed very shortly. Karson was hired full time down here in Nephi which meant we now qualified for insurance. I decided to wait and ask the doctor about Nash at his 4 month appointment. Our insurance started January 1 and I took Nash in a few days later. I am so grateful we have insurance. For the first time in four years we just happened to get insured the same time this was going on.They took Nash down for an X-ray and sure enough his little spine had a curve to it. It was diagnosed as Infantile scoliosis with a 23 degree curve.

Blessing number 3 came the way of the internet. As you can imagine we spent countless hours surfing the web for information about Infantile Scoliosis. We had come to learn that it only occurs in 1 percent of babies. My heart dropped when I read that. We came across the most amazing website that helped calm some of my fears. There is so many things they can do now that can fix Scoliosis if discovered early enough. We were referred to Shriners hospital in Salt Lake City to a Doctor who specialized in scoliosis. He is considered the best in the Nation. People come from all over the world to see him and he was only a few hours away from us. We were scheduled a month out and I couldn't wait to go.
His appointment was Feb.1.  Karson couldn't get off work so I made my mom go with me. I didn't want to be alone. We got there early just to find out they were running late so we had to wait some more. By the time we were called in I was anxious as could be. People were in and out of our room talking with us. They were extremely nice and very reassuring. They measured Nash's spine again and it was a 24 degree angle. We were told that he looked extremely good for all things considered. They told us that since his spine didn't have any rotation to it, that it may have an 80 percent chance of healing on its on. But since he is so little and young it is still hard to tell.  This was honestly music to my ears as well as heartbreaking. I just wanted them to fix him right than and there. We are scheduled to go in 5 months to see if his spine has curved anymore and if so than we will take more action.
There is nothing scarier than finding out there is something wrong with your little baby. I am so grateful that it isn't something worse though. I am also grateful for the gospel, the power of pray, and love and support from family. We have seen so many blessing come from this. I do know that my little guy will be okay! Thank goodness for modern medicine. If you want to learn more about infantile scoliosis go here.

Grandma Marylin told me about this a few days ago. Your cute little family has been in our prayers ever since! If I can help with anything let me know! Love ya

Girl I am so sorry. There really is nothing worse then having to worry about something like that with your baby. Sounds like it will all work out great and we will keep you guys in our prayers. Love ya

"Life presents many challenges, but with the help of the Lord, we need not fear. If our lives and our faith are centered on Jesus Christ and His restored gospel, nothing can ever go permanently wrong." Howard W. Hunter (published in The Teachings of Howard W. Hunter by Clyde J. Williams, 1997, pg 40.)

poor baby! crazy! so glad your dad spotted it! good luck! you are right, there is nothing harder to hear than something "wrong" with your kid. :(

I knew something was up; glad you posted this! I'm hope it heals on his own!! Thank goodness for insurance!