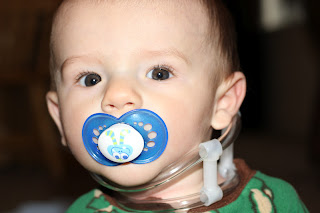 I think this little guy was born with such a sweet little spirit for a reason. He is one tough little guy. He has gone through so much in his short little life already. Since we have had him in therapy he has advanced so much. He has full range of motion with his head now which is an awesome achievement in such a short amount of time. Unfortunately with his crooked spine, it makes him sit crooked. He has learned to compensate by holding his head the other way to even himself out. He looks like an S almost. To help the therapist suggest a Tot Collar. It pushes his head so he has to hold it the other way. Poor kid hated it at first but tolerates it just fine now. He has to wear it  two times a day for 20 minutes and than work up to an hour. I know I have said it before but we have been so blessed since he has come into our lives. I have seen some miracles and blessing happen through all this. He is such a trooper! 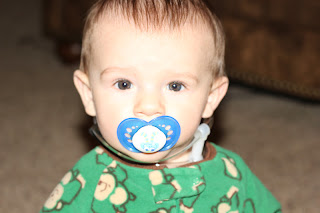 So great that you found such an attentive therapist, and that there are so many remedies for your little charmer. he is a doll.