My mom has given everyone one of my boys their first bath at home. Owen wasn't quite sure he enjoyed it. He has since learned to love the tub. I love the smell of a newborn. They smell super delicious. 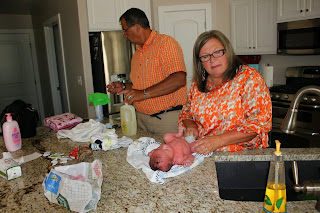 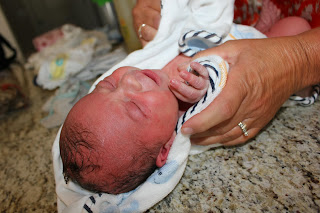 My grandma and grandpa Woodruff came down to meet Owen. He sure is a loved little boy. I had to snap a few of Owen with my parents as well. 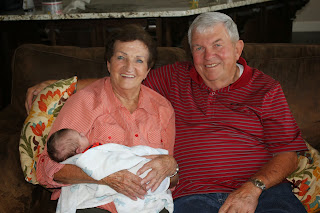 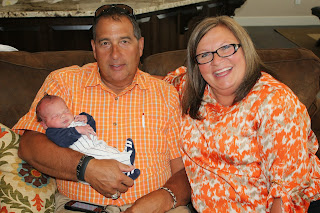 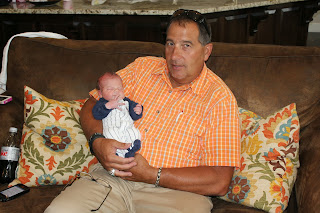 Nash turned two on August 22. He was so excited for his birthday. We just had a little family party but he was in heaven. He is obsessed with "softball game" aka baseball. That is all he wanted for his birthday. My mom gave him a ball, glove, bat, and a t-ball stand and he is in heaven. He is so hilarious to watch play. He is actually pretty good for a two year old. He is such a funny kid. He can talk really well for being a two year old and I often have to remind myself that he is only two. He thinks he is as big as Madden and wants to be just like him. He loves his "chochy milk". He will pretty much eat anything. He has a bowl of Mac n Cheese for breakfast every day. He is probably the most disgusting kid you will ever meet. He always has food everywhere. He drools like crazy. He is the sweetest boy ever. He loves to snuggle and give smoochie kisses. He loves to be outside and ride his bike. His two favorite shows are Bubble Guppies and Team Umizumi. He is so sweet with baby Owen. We love this crazy little boy! 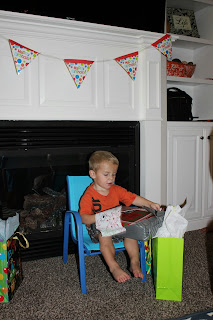 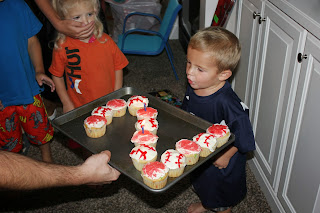 I love this picture. Someone is holding Mya'smouth so she wont blow out the candles. Too funny. 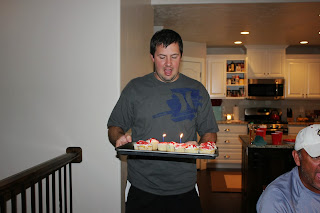 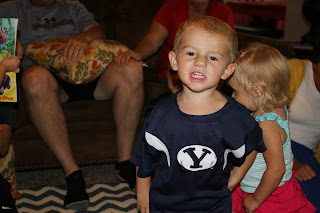 It's crazy that this little man has been with us for two whole months now! I don't remember life without this smiley guy! He is the happiest, most easy going baby! He only cries when he is starving, just like his mom! He is starting to laugh a little and it's adorable! He is such a great sleeper. He goes down at 8 and sleeps till 6, eats and goes back down til 9. He honestly sleeps better than my older boys! He likes to lay on his play mat. He doesn't care too much for tummy time unless someone is down by him. He likes to have a cozy blanket right up next to his face when he sleeps. He is a cuddly guy and I enjoy his snuggles. Love you Owen so glad you are in our crazy family! 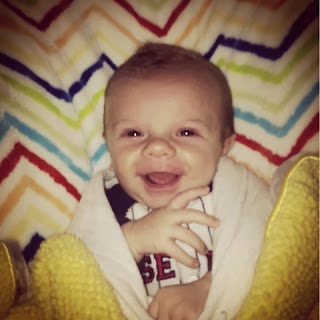 We have season tickets for the BYU games. If any of you know my husband you know how much he loves the Cougars! Let's be honest I do too. My boys have chose wisely as well and love the "go cougars" too!!! Smart boys. Madden will even tell ya that the Utes are a naughty word. Karson and I were able to go to the game kids free. It was so nice to have a break and a date night. It has been a while since it's been just the two of us! Sadly the Cougars lost but we still very much enjoyed our night. I'm honestly still recovering from the late night. I don't remember the last time I have seen two on the clock! 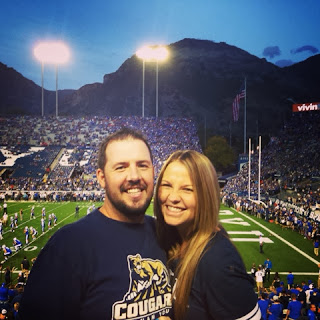 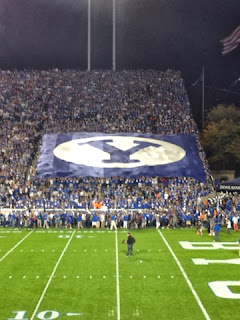 These three boys love each other. It will be fun to watch them grow up. I have a feeling things are going to be a little crazy at our house! 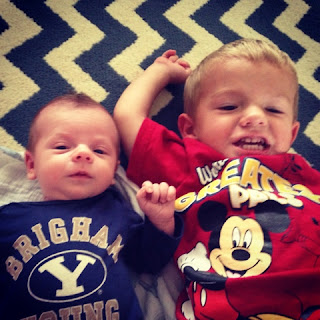 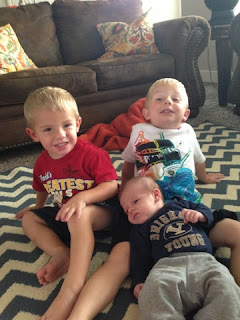 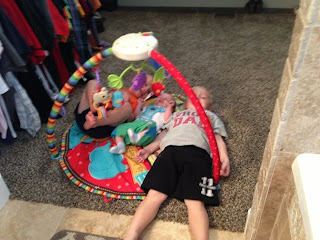 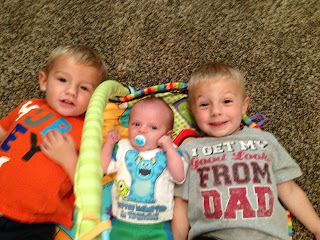 It has been over a month since this sweet little guy has come to our family. It honestly feels like he has been with us forever. He is such a sweet and happy baby. He is the best sleeper so far. The past two nights he has given us 11 hours straight of sleep. He eats like a champ. He is starting to smile like crazy. He is very alert and follows and tracks voices. He loves to be held upright against your chest. He is only fussy around 8 at night. The older boys love him to pieces. He is usually getting slobbered with smoochy kisses. We love our baby Owen! 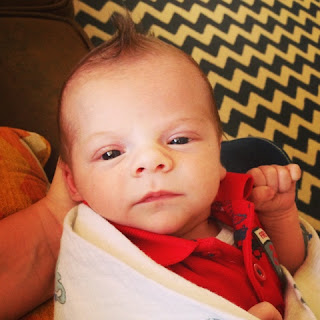 I think bed rest has a whole new meaning to me. I used to secretly think that laying in bed all day sounded delightful. Being able to nap as you pleased and catch up on the many shows and movies I was behind on. Well that lasted about two days before I was about to lose it. Every morning that my two boys left me I'd sit and cry. I felt horrible that I couldn't take care of them myself. I felt horrible that they were not sad to leave me. I felt horrible that I was sometimes happy they were gone. I was a ball of emotion. My doctor told me I had to be laying down the majority of my time. I couldn't and still am not aloud to lift anything heavier than Owen. It hasn't been easy. We truly are so blessed to have the family and friends that we do. So many people willing to help us out with the boys and brought us so many delicious dinners! I am finally to the point where I am feeling semi normal. I still have some pain but it isn't anywhere near the pain I was in. This prolapsed uterus is for the birds! My doctor has told me that it may take up to a year for everything to be normal again and eventually down the road I will need a hysterectomy. The good news is I can still have kids if we choose to do so. He said that if we do choose to that we need to have the baby sooner rather than later. Meaning that we need to start trying when Owen is a year old. Yikes! I guess we will cross that road when it gets here! This has been a crazy time in our life but also a blessing in many ways. We have grown and leaned a lot. We have become closer as a family. Thank you to all those who have helped and prayed for us. We have felt your prayers and love. We are blessed. 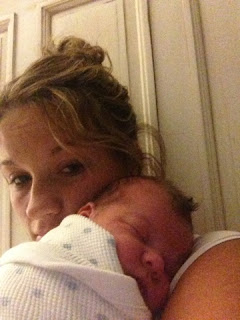 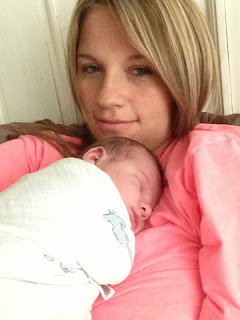 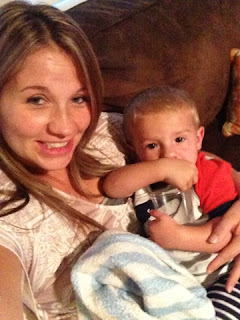 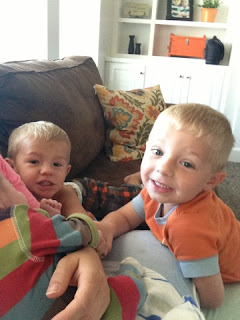 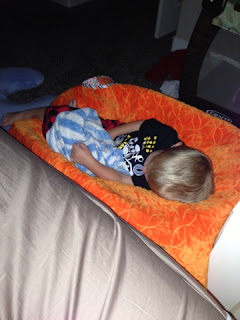